Posted at 14:30h in Australian Hellforge by Shaine 0 Comments
0 Likes

Getting ready to take flight

Welcome Part V of my custom thunderhawk gunship project. The major progress this week has been completing the basic body frame. You can see in the image below that the green stuffing work on the chassis has leveled out with the original framework. Now that it’s mostly inline and level, it can be sanded and filed down to make a more subtle join and smoother surface for painting. You can also see that the tail has been fitted. The main parts of the tail wing are just your standard Stormraven Gunship bitz. Since this build will most likely have a top level, or a huge turret, I wanted to have a tail wing that extends up higher than normal. I also wanted to add a little more detailing and thought the Nephilim Jetfighter has a fantastic tail piece. 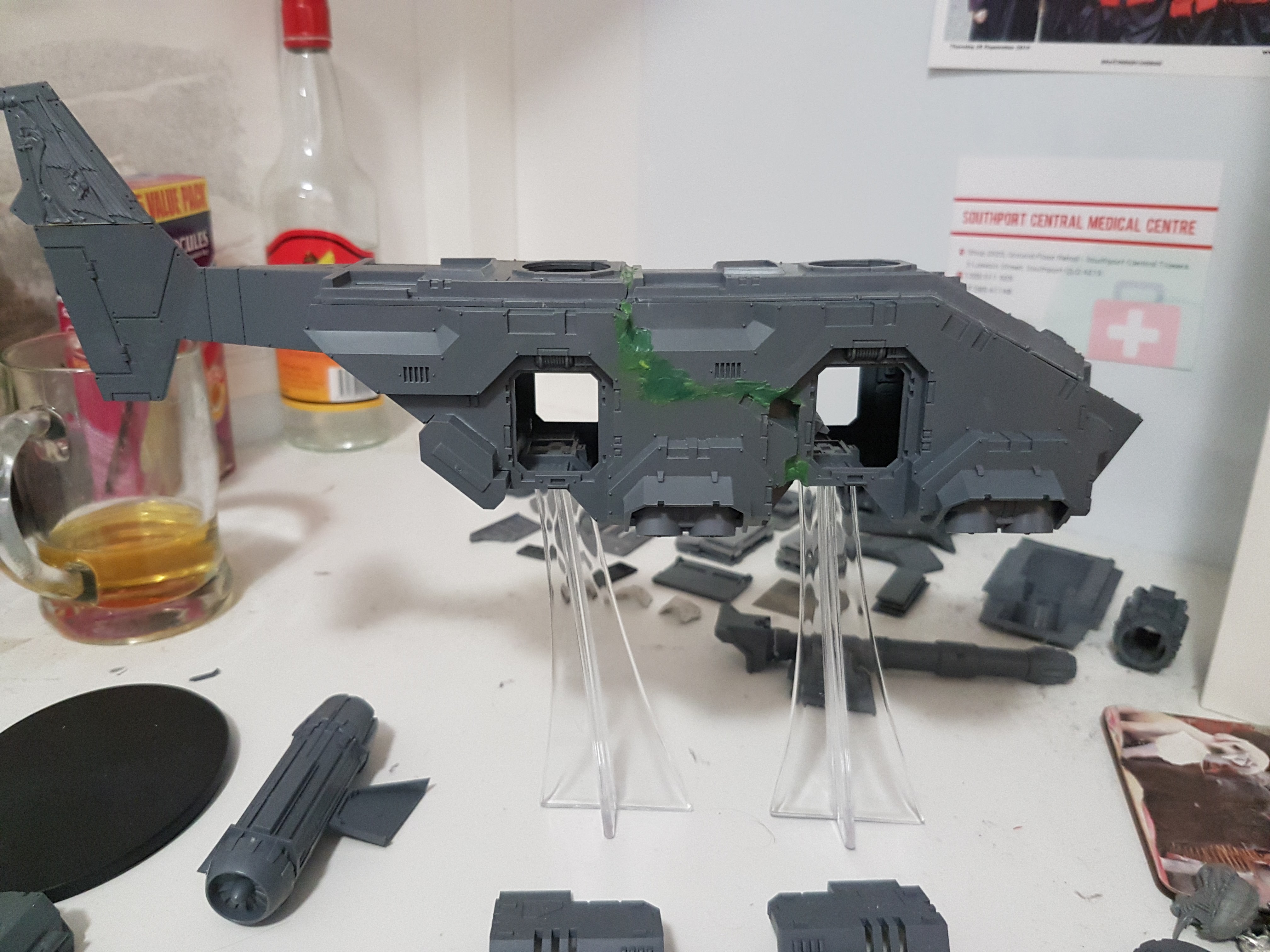 You can also see how the current model sits on the supplied flying stands. It balances well on a single stand, but there’s still lots of work to do so the center of gravity might change. Additionally, I don’t want it to fall of a single stand and shatter everywhere. But i’m not entirely sold on using two flying stands. It sort of looks silly to me. I’ll most likely try and either have a second stand coming out of the first one, cut the stands so they make the model tilted and appear in motion, or balance the build to only use one stand.

Back at the start of this project I wrote that the two main parts of the chassis didn’t join correctly. They’re a little tilted and the more the frame is built out, the more it shows. In the next image below you can start to really see it. While the front of the model is level and flat, the back is tilted and you can see some warping. I’ll admit, that it being so noticeable is incredibly disappointing. I’m hoping that by the end of the project, and once the second level/turret is fitted that the error won’t be as noticeable. 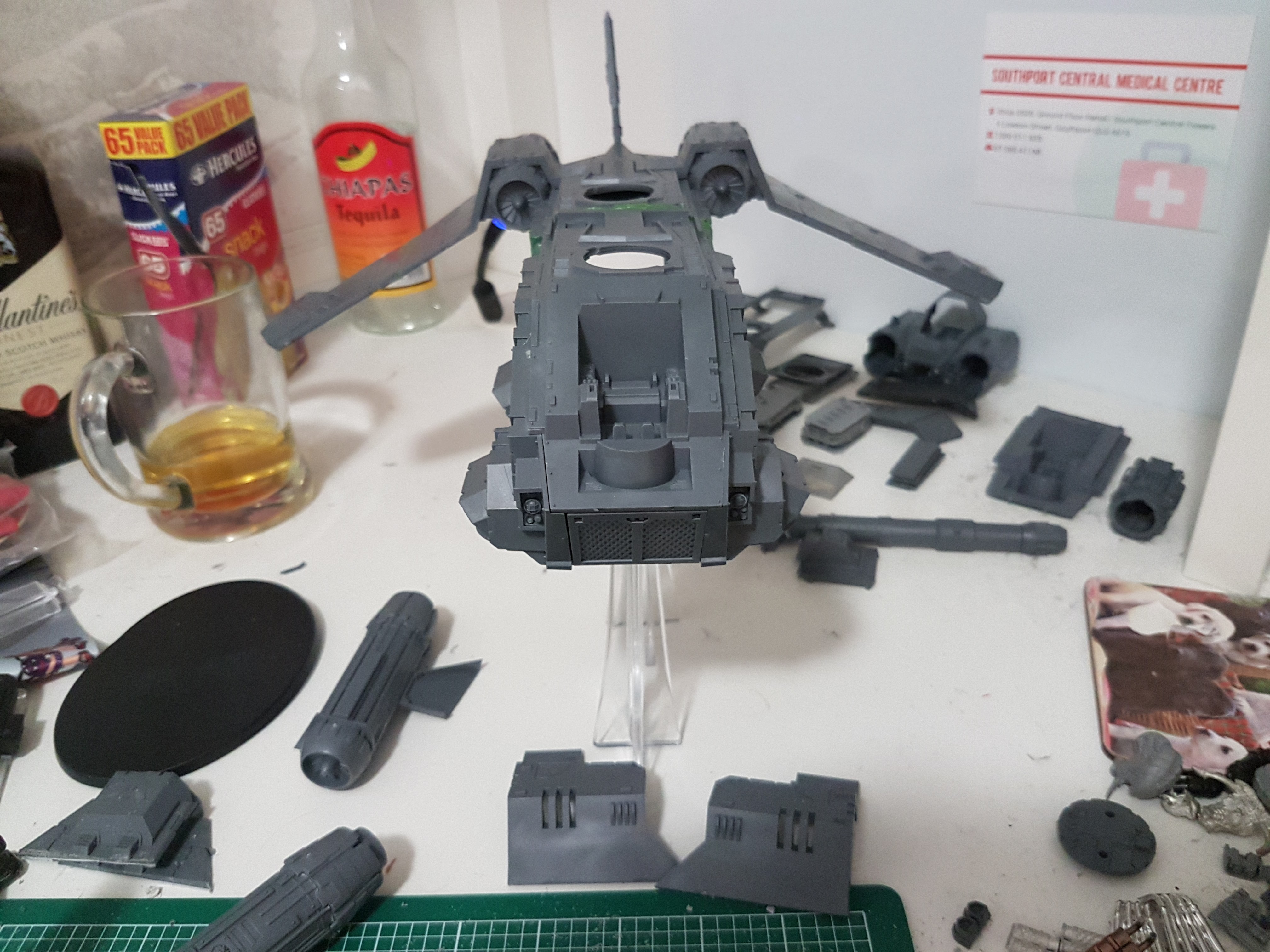 In the above image, you might also notice the wings are fitted on. This marks the majority completion of the model. It’s not going to get any noticeably longer, thicker or wider than it is here. There will definitely be a lot of extra detail added. Extra weapons and armaments, extra engines, and a whole second top level/turret. But this is the main size of the model. Currently sitting at over two times the length of a Stormraven, i’m pretty happy with how everything has come together so far. Excluding the aforementioned warping obviously. 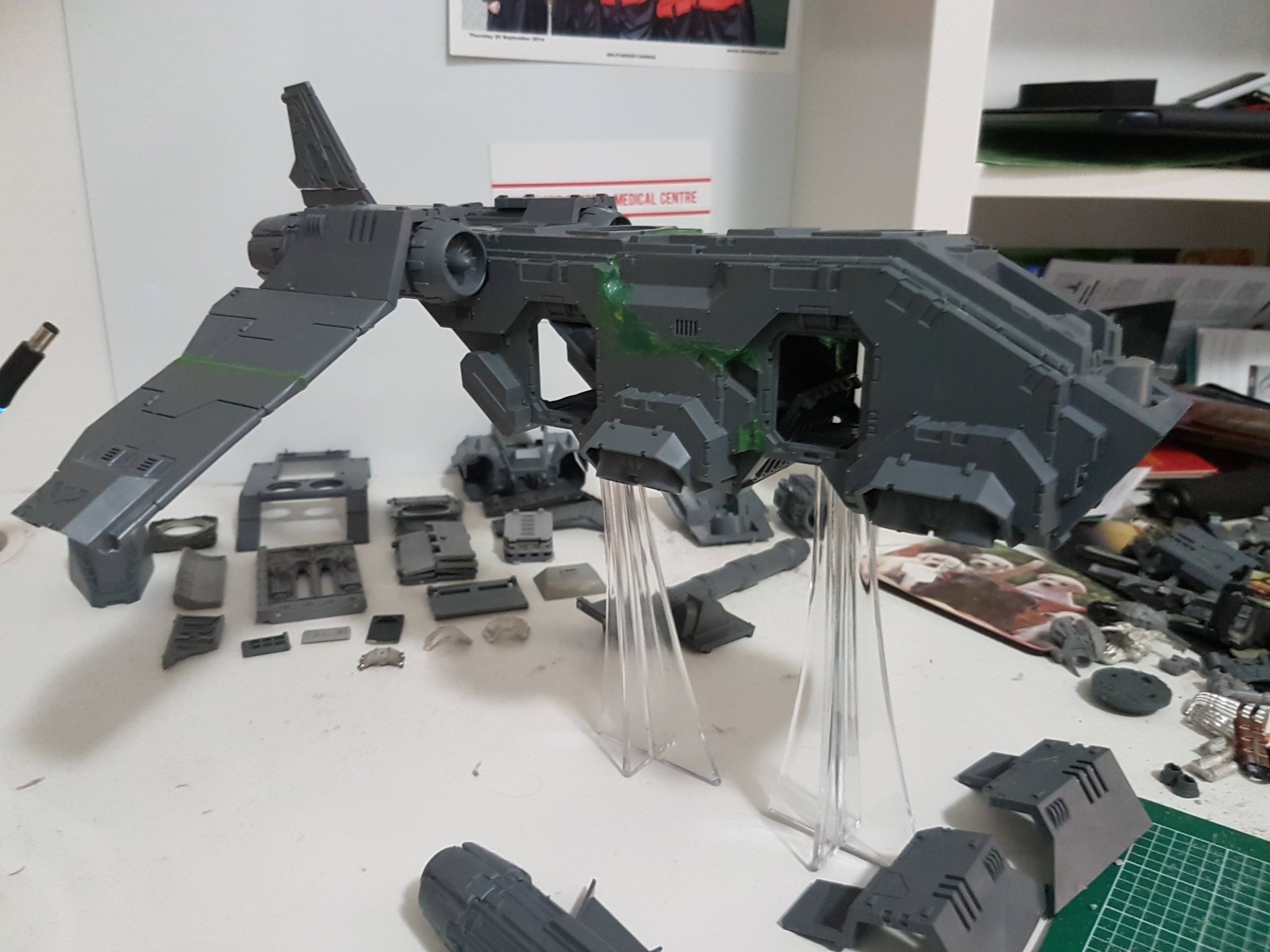 The above image is a great side profile shot. You can see the join more clearly on the wings, and get a better feel for the size and overall aesthetic of the model. You can also see more of the random bitz I’ve got neatly piled in the back. Not everything is going to end up including in the build, there’s way too much stuff on my desk for that! But I always find it helps with the creative process to have a lot of extra parts lying around. If something isn’t quite working for me, I can quickly rummage around and find a replacement. Sometimes a new piece will take me in a new direction and i’ll end up with something I didn’t consider – but that is overall better for the model.

If you have any questions or suggestions – let me know in comments below or on social media.