Posted at 16:00h in Australian Hellforge by Shaine 0 Comments
0 Likes

A View From The Top

Missed a step? Catch up on part I, part II, or part III.

Welcome to part IV of my custom Thunderhawk Gunship project. When I cut the roof pieces together, I used a Citadel Razor Saw, which didn’t work.  The blade was too flimsy and it just refused to cut in a straight line, no matter what precautions I took. They’ve since updated their tools and replaced it with a ‘Citadel Saw‘. I haven’t used this yet, but it couldn’t possibly be worse than the Razor Saw. At any extent, the cutting job accentuated the gaps between the joins of the frame. More green stuffing would be needed to fill the holes. You can see in the image below how the ends don’t match up straight between the two pieces, and how the side of the framework is warped out a tad. Clearly, there’s still a lot to of minor patching work needed to complete the frame. 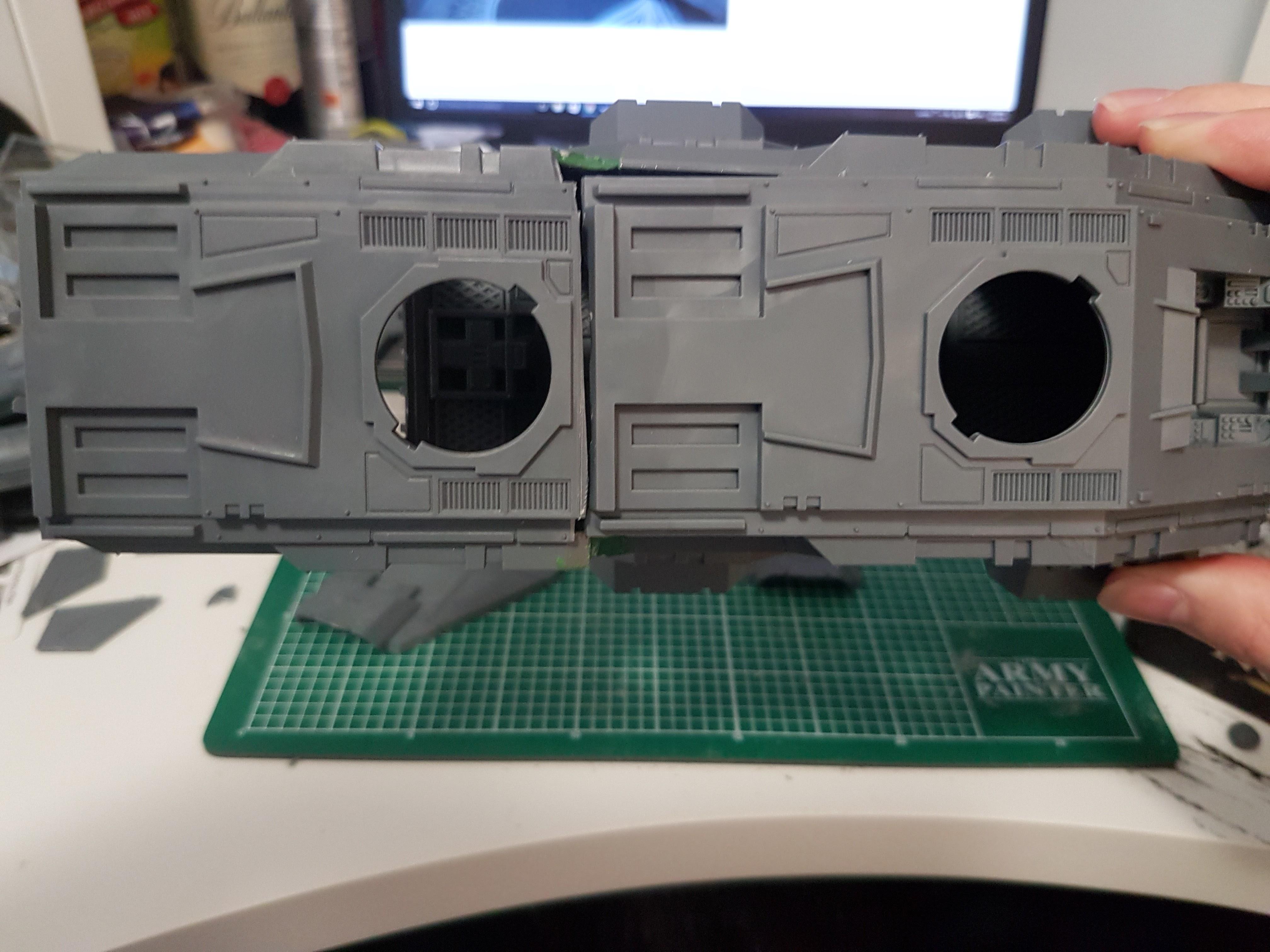 I needed a break from staring at the chassis of this build – so I’ve moved onto the wings. Originally I wanted to use a set of Valkyrie wings for this build. The curvature in those wings would have allowed more mounting room for the under slung weapon systems. And I thought if I could combine them with the current spare stormraven wings they would provide the wingspan needed to be realistic. There wasn’t any sitting in my bitz box however, and I didn’t know anyone with a set lying around. In an effort to keep the cost of the total build down, I decided to instead make use of the original storm raven wings. And eventually I came across a modification online that someone had done for their own special Stormraven. You can see the example in the image below on my laptops screen.

Measure twice, cut once, then repeat

In the image below, you can see that I’ve cut the wings from the 2x Stormraven kits, with the aim to combine them together. I needed about 25% extra wing span to be able to fit the additional thruster assembly I was planning on using. As well as room for any extra weapon mounts, bombs, or additional wargear. Instead of the relying on the razor saw mentioned above, I used pliers and a hobby knife to heavily indent and scour the wings first. So that the razor saw had very minimal heavy cutting to do. As you can see, he cut is much cleaner and straighter, and overall was more reliable.

After lining the separate pieces up on the mat, I filed down the adjoining areas for a smoother fit. Given the heavy green stuffing work needed on chassis, I really wanted an easier time on the wings. This meant I ended up spending a lot of time measuring the joining areas before cutting. All of this extra work paid off and once done, the wings only needed very minimal green stuffing.

Up up and away!

I really like the stormraven wings. They have vents, flaps, and the imperial eagle insignia already included. I felt that on the topside, I really didn’t need to add in anymore detail work. Maybe there’s room for some minor green stuff or plasticard sculpted rivets along the joins. But overall the detail was already included. I used superglue to bond the two pieces together, then very lightly filled in the gaps and sanded down the excess to have a very smooth joint. As soon as the molding putty was dry, I proceeded to immediately drop the two sets of wings and shatter the bonding work right along the join line.

Once I had cleaned the pieces back up, i also drilled in room for 4 pins along the join, to better hold everything together and avoid the breaking situation again. A bit of superglue, little of green stuffing and sanding, and we were back to having a completed set of wings for my custom Thunderhawk gunship.

If you have any questions or suggestions – let me know in comments below or on social media.