Posted at 17:59h in Australian Hellforge by Shaine 0 Comments
0 Likes

Drowning in a Sea of Bitz

Missed a step? Catch up on part I, or part II.

Part III begins with an update on green stuffing the framework – the major focus at this point. I’ve mixed up a darker batch and started to build up the layers until it’s ‘even’ with the existing frame. Before painting the excess putty will be sanded and filed down to make a smoother base for the paint, and improve the overall cohesive look. You can see in the image below how this is progressing, in total there’s probably 3-4 separate layers. Allowing each layer to mostly set before adding the next and building it up to the roof has been a tedious and time consuming process. You can also see that while one side is making great progress, the other side is a whole other story. 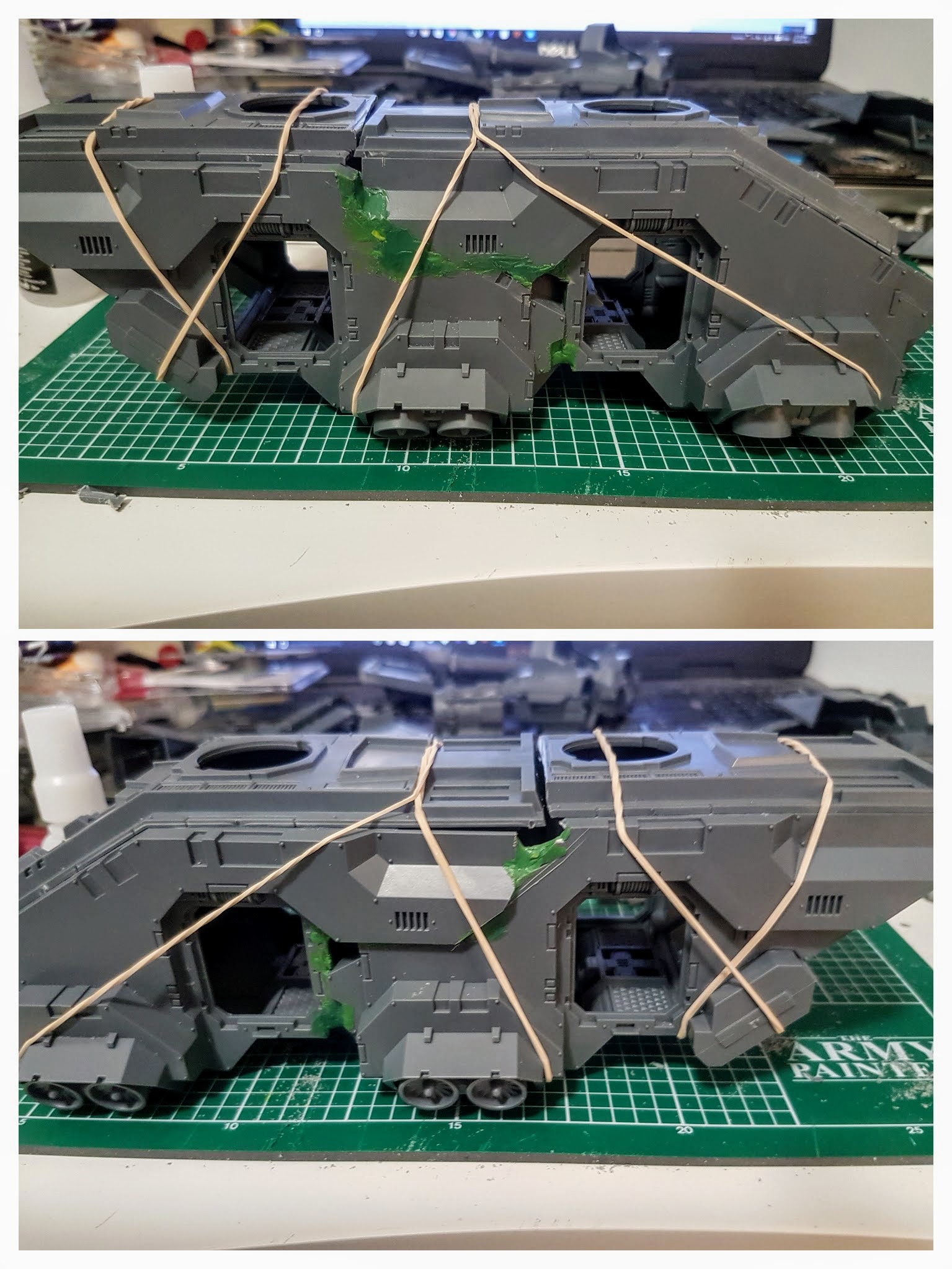 Holding It All Together

I’ve also glued into place the cut down roof kits from the two Stormraven Gunships. Again one side of the build is letting down the other, and kept popping out of place. That’s where the rubber bands come into play. They are so dutifully holding the separate pieces in position. The rubber bands actually fit super well. There’s lots of areas to latch onto since the framework has so many dips or protruding pieces.

While it sets, I decided to go over some of the bits I had floating around and show my work space. I’ve been collecting, building, and playing Warhammer 40,000 for a long time now. And over the years I’ve amassed a huge amount of left over bitz from all of the different custom projects I’ve done. As a general rule of thumb, I don’t like my models to be stock standard. I wanted each one to have some sort of unique flare to them. Something which makes them stand out from other players, collectors, and hobbyists. 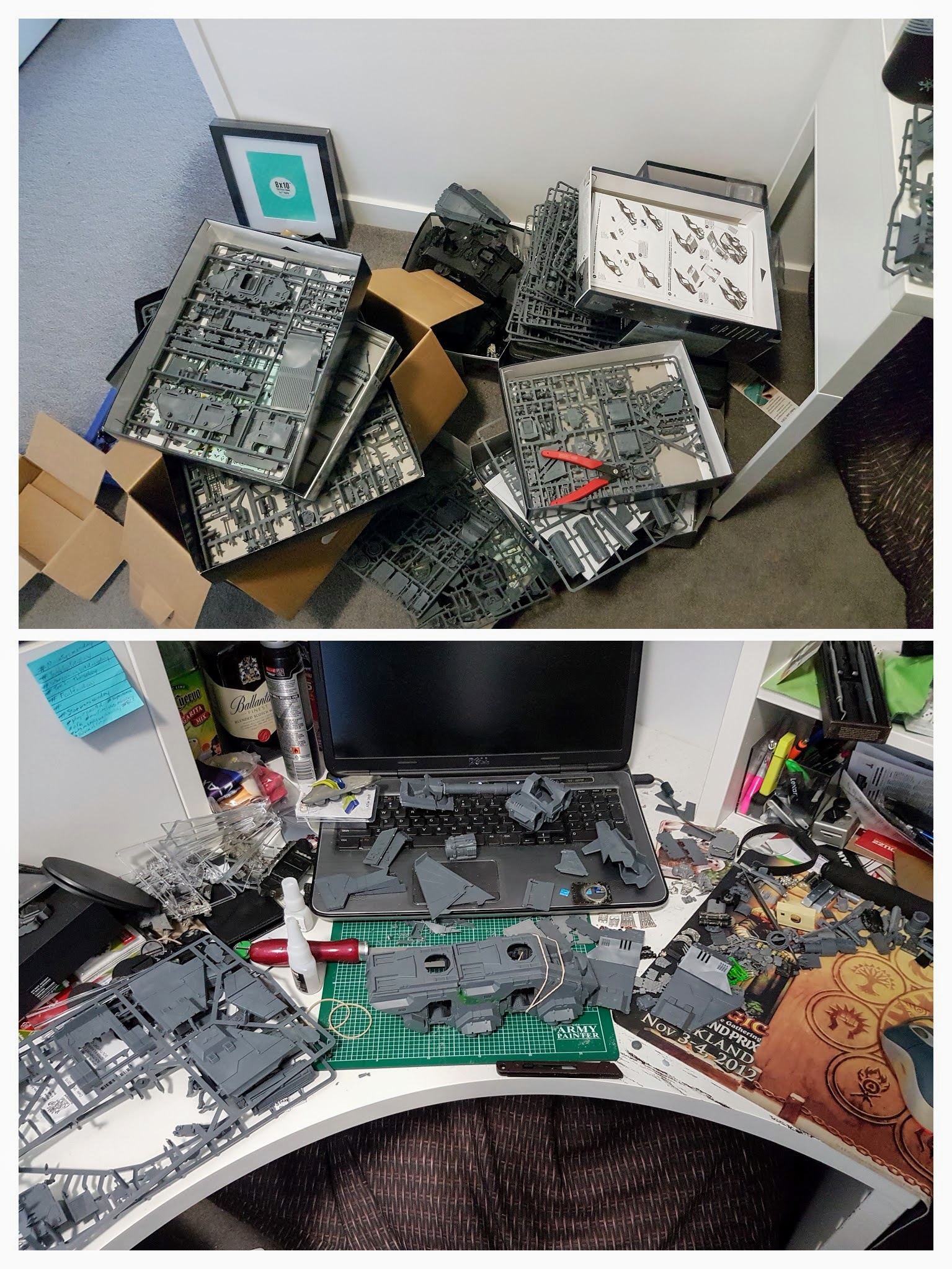 For this build I started with using:

From these, I was originally planning to build the whole custom Thunderhawk Gunship. But very quickly I realised it wasn’t going to be enough, or suit the idea I had in my head so I dug through my extensive bits collection, borrowed from friends, and traded with strangers to get some additional things which included bits from:

You can also see many, many random bits lying around on my desk that I was considering for different parts at one time or another. Including Carnifex heads for possible trophies, to an old whirlwind missile pod for a possible weapon system. 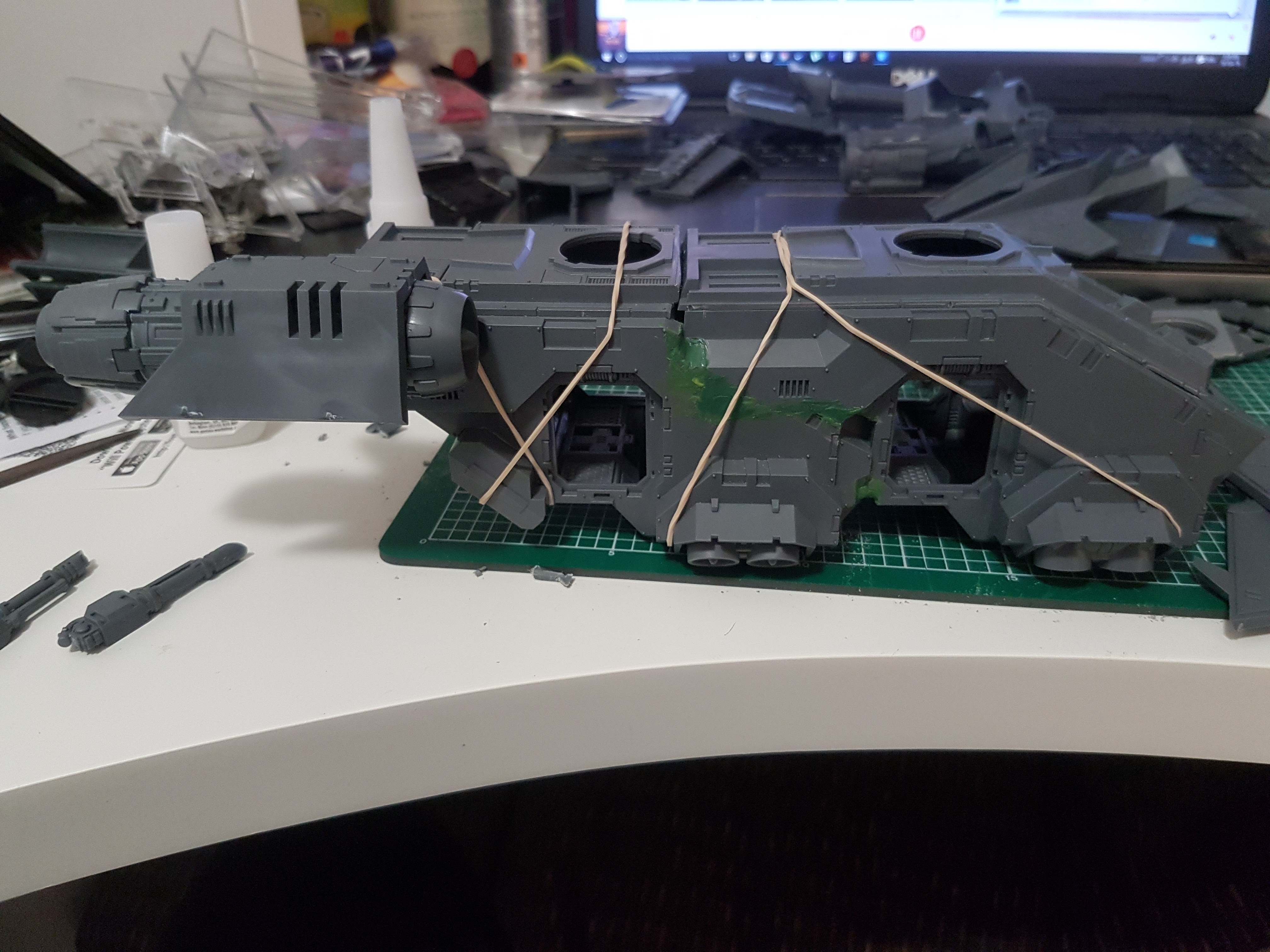 In the final image above, you can see the start of the engine housing which is so far just standard Stormraven Gunship thruster. I’ve attached it here to get an idea of the length and bulk of my custom Thunderhawk gunship. While i’m starting to become happy with the overall aesthetic of the hull. It still needs to be bulked out more. I still need to figure out a way to attach a second engine under the first housing. But currently the rear landing gear housing stops a second thruster from sitting snugly.

If you have any suggestions for the engines, let me know in the comments. Stay tuned for part IV next week.